With locations across the globe in New York, Dubai, Sao Paulo, Rio, Punta del Este, St. Barth, St. Tropez, and the just-opened Monte Carlo, Bagatelle Miami Beach just celebrated its 2-year anniversary and is proud to reinforce its place on the Miami culinary scene. Known for its fancy drink presentations, enigmatic music and countless gorgeous faces, the French-Mediterranean restaurant has become a popular dining destination among foodies, celebrities and socialites. The Miami outpost is helmed by Executive Chef Matthieu Godard.

Godard studied food in France before embarking on his career at Club Med resorts in France, Spain and Greece. After honing his skills, Godard knocked on the door of Danial Boulud's DB Bistro Moderne in New York and worked his way up the ranks at Boulud's signature restaurant for the next eight years. During his stint under Boulud, he was given the opportunity to work at the prestigious Michelin 3-star restaurant, Daniel. From there he made the decision to transfer to South Florida to helm the kitchen at the restaurant's Miami location, before taking the reigns at Bagatelle in 2015. While Godard admits that "it was difficult to leave New York despite the demanding and intense culinary scene, I wanted a change of scenery which is why I ventured to Miami."

Godard knows that people come to Miami to relax on the beach in the day and party all night, but with the changing culinary scene in Miami and customer's adeptness to becoming more food educated, he understands the importance of great food. With swimsuit season a year-round affair, Bagatelle has placed their customer's needs to maintain their svelte figures as a top priority. Launching a spring seasonal menu, Godard hopes to create high quality dishes using brightly colored vegetables. Using light and refreshing fruits such as tomato, oranges, and grapefruits as well as herbs such as thyme and rosemary which are an essential part of the Mediterranean diet, Godard is aware that customers refrain from heavier options because they want to show off their body.

As Bagatelle creates a new menu every season, Godard is grateful that the restaurant allows more flexibility with designing it. "Five or six dishes are staple to Bagatelle's menu but the remainder are up to the chef to create." Despite the responsibility of designing a menu, Godard appreciates the creativity and freedom that Bagatelle awards him. For the summer, Godard recommends the pan-roasted Chilean sea bass drizzled with lemon, which has garnered critical praise.

Godard says "I don't want to reinvent the kitchen. I believe that people want simple food. Customers are looking to see if the dishes are well plated, well cooked and well seasoned. Customers just want a real meal." So if Bagatelle is calling your name, stop by for a not so classic twist on French American food. 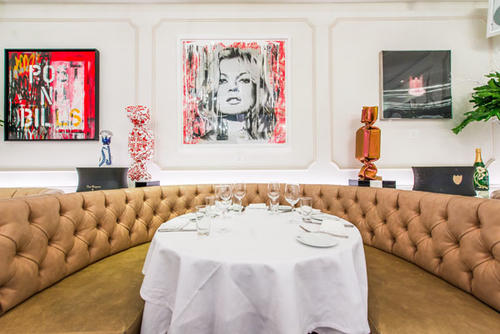 Ready to Start the Party?
Reserve your spot at Bagatelle!
Reservations
Explore Our Exclusive Events
Events Calendar
Go to Top